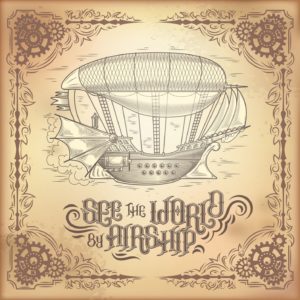 The story of “the little hedgehog who wanted to pilot a dirigible” is set in a steampunk universe.
Since I didn’t know whether you knew what it was, I decided to give you a (very) brief overview.

From the Merriam-Webster dictionary :
steampunk, noun

The steampunk era setting is usually said to last up to the first world war.

Some people define it as being a “past future” or “retro future”, and it is considered as a sub-genre of science fiction mixed with other genres, such as adventure, mystery, western…

Initially a literary genre, it has been for years a much wider universe – comics (paper and online), films and series, games and role-playing games, costumes and events, and a huge quantity of DIY tutorials in written or video format.

Wikipedia explains really well what steampunk is – the evolution of the literary movement as well as the sub-culture derived from it – so I wont plagiarise more:
« Steampunk » on Wikipedia.

In a few words : steam-powered airships, top hats and parasols.

There is another genre, often considered as steampunk, called « gaslamp fantasy » which has a lot of “19th and early 20th century with steam” but with more fantastic elements added to it such as magic, werewolves and vampires, ghosts …
Gaslamp fantasy can be considered a historical fantasy.

A big part of those works – literary or otherwise – seem to be set in London or Great-Britain during the Victorian and Edwardian eras (from 1837 to 1910).
Think Sherlock Holmes or Downton Abbey with more steam, or even fantasy elements.

It’s true that Great-Britain seems to be a great setting for fantasy, historical re-writting and mystery, but there are also works set in different places – in France, in the US and elsewhere, including fantasy worlds.

Did you know steampunk or are you discovering it?
Does it make you want to know more about it?
If you already knew it and like it, which work would you recommend without hesitation?